Home » News » So, what really is the difference between a Chiropractor, Osteopath and Physiotherapist?! 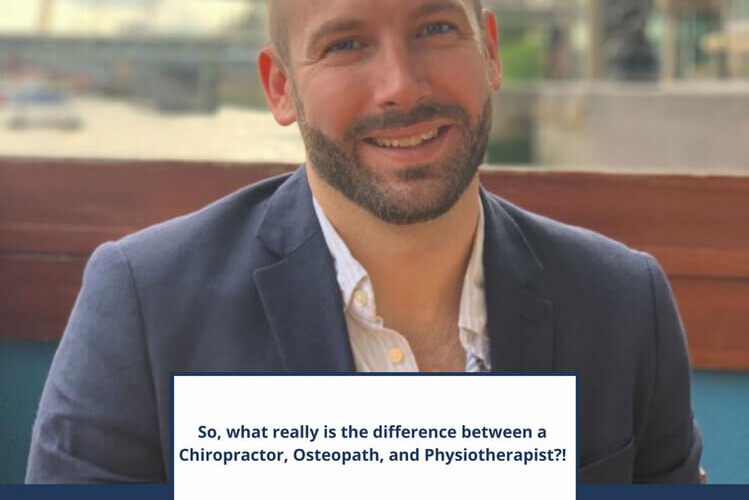 At the Health Hub this has got to be one of the most commonly asked questions we get from patients and rightly so. It is not obvious or easy to decipher the difference particularly between a Chiropractor and an Osteopath, and even harder to know who you should be asking to see!

So, myself and the team thought we would give a brief summary of the differences to help you understand….

I remember asking my head lecturer at University – ‘what is the biggest difference between Chiropractors and Osteopaths?’ and I will never forget his answer – ‘the spelling!’

In honesty there is a bit more to it than that, but it made me laugh. To identify the true difference, we need to go back to where it all began for all three therapies and their philosophy. Like anything, new professions start with an idea and a person who has a vision.

Chiropractic was founded in 1895 when its founder, Daniel David Palmer, from Iowa ‘adjusted’ the spine of a deaf janitor and claimed to restore his hearing. Spinal manipulation was not an unknown treatment in 1895, and Palmer never claimed to be the first to use manipulation for the cure of disease. He did claim, however, to be the first to use specific contacts as short-leverage points for making more specific spinal ‘adjustments’. At this very early stage the whole focus of chiropractic was manipulating the joints of the spine, as it was seen as the root of many problems.

Osteopathy was founded in the late 1800s by physician and surgeon Andrew Taylor Still in Kirksville, Missouri. The son of a surgeon, Still soon discovered that in order to achieve the highest possible form of health, all parts of the body should work together harmoniously. His goal was to restore the body to optimum health with minimal surgery and medicine, influenced in part by the realisation that medical treatments of that time were largely ineffective and, in some cases, harmful. Over time, he treated patients with a wide range of conditions, from dysentery to sciatica and arthritis, with varying results he gained a reputation as an effective practitioner. In essence Osteopathy was a more holistic approach looking at the whole body and not specifically spinal focussed like chiropractic.

The earliest documented origins of actual physiotherapy as a professional group date back to Per Henrik Ling ‘Father of Swedish Gymnastics’ who founded the Royal Central Institute of Gymnastics (RCIG) in 1813 for massage, manipulation, and exercise. Treatment through the 1940s primarily consisted of exercise, massage, and traction. Physiotherapists can also manipulate like a Chiropractor or an Osteopath however this wouldn’t be covered within their initial qualification. It is also important to state that there are many arms of Physiotherapy beyond what we all think of, such as Respiratory Physio, or Neuro Physio.

For the purpose of this piece I am focussing on Musculoskeletal Physiotherapy as this is primarily what is offered in a private clinic such as The Health Hub. This would focus on the body’s muscles, joints and soft tissues and is very effective on a whole range of injuries such as strains and sprains or rehabilitation following surgery.

In general, it is fair to say that the major difference in approach is that Chiropractors and Osteopaths tend to think joint first then muscle, whereas Physiotherapists will think muscle first then joint.

Chiropractors and Osteopaths tend to be renowned for ‘clicking’ which would be manipulation, however this is just one treatment tool and it isn’t always warranted or used. Whereas Physiotherapists tend to be thought of as giving exercises to strengthen or stretch, but again this is just a treatment tool they can use along with acupuncture, ultrasound and massage.

All that said what has happened over time, and rightly so, is that science has come into it. This means that all treatments that Chiropractors, Osteopaths and Physiotherapists give are (or should be) evidenced based. All modalities will read and have access to research papers and this information will help inform their treatments, although each approach may be slightly different. This is why we work as a team and why some patients will see two or three practitioners, as this is the most effective and quickest route to optimum, lasting results.

In summary a generally good guide is if you feel the pain is joint related – ‘your back has gone’ or ‘you’ve cricked your neck’ then we would generally recommend seeing either our Chiropractor or Osteopath first. If the injury appears more muscular like a pulled hamstring, or shoulder injury then we would suggest our Physiotherapists as a great starting point. If you really aren’t sure and you are struggling to find the root of the pain then don’t worry as we offer a free telephone consultation service to help guide you to the right practitioner, as we appreciate that it can be hard to know where to start.

I hope that this helps in some way to clarify the differences between the professions.

Please get in touch using the form below